"Of ourselves we give, so others may live"

On August 7th, 1990 at 7:00 pm, a group of concerned residence of Metal Township met at the Path Valley Community Center to discuss the possibility of forming a new Fire and Ambulance in Metal Township. It was discussed with the residence present that this group would renovate the south end of the Fannettsburg Ruritan Building, and to purchase and ambulance and a fire truck of their own.

The ambulance would be purchased from the Cumberland Valley Hose in Shippensburg, Pa. for the price of $8500.00. A fire engine would be purchased from the Newburg-Hopewell Fire Company in Newburg, Pa. for the price of $2000.00. Walter Bricker stated himself and members of his family would donate the $2000.00 to purchase this fire engine. Everyone at this meeting agreed with the apparatus listed above, and all were in favor of these purchases

At this time the Company elected its first officers: 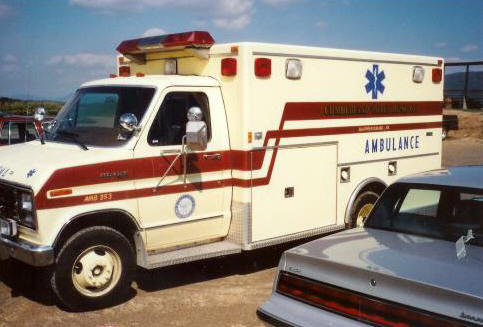 It was agreed that all officers would hold their positions for the years 1990 & 1991.

The following people volunteered to serve on the building committee to get the building ready for the Company start up on January 1st, 1991.

A committee was formed to develop By-Laws for the company. It was decided that the company meeting would be the 2nd Monday of each month at 7:00 pm, with the first official meeting on August 13th 1990. The meeting would be held in the Path Valley Community Center. It was also decided that all members would be charged $5.00 for membership for the years 1990 & 1991.

At the next meeting on August 13th, 1990 the following items were reported. The building committee stated it might cost approximately $10,000.00 for renovations of the building. The Ambulance form CV Hose was purchased. Fund Drive letters were to be mail August 20th, 1990 to residence in Metal Township for funds needed to complete this project.  The motto of the company would be “Of Ourselves We Give, So That Others May Live”.

The first fundraiser, which was a Festival outside the Ruritan, scheduled for September 15th, 1990 to start at 4:00 pm.

An EMT class was scheduled to start October 2nd 1990 at the Fannettsburg Ruritan on Tuesdays and Thursdays throughout the fall and winter. A Vehicle Rescue Class was scheduled for the company on November 17th, 1990. There would be more Firefighting Classes prior to start up time.

On October 8th, 1990 there was a directors meeting to talk about the purchase of a second Fire Engine from Brentwood Fire Company in Maryland. This engine was a 1969 American LaFrance Pumper. The cost of the engine was $1,500.00, which was made in payments of the next five years. All were in agreement to purchase the engine.

A local resident Daryl Gipe, son of Chief Engineer Merle Gipe would volunteer his time and talent to paint all of the apparatus of the company, and the company colors would be Red & White.

On November 25th, 1990 the company hired its first Paid Driver, Paul Shannon form Marion. Paul would start his first day on December 26th, 1990. The Metal Township Supervisors agreed to help with this endeavor with funding, and also agreed to pay the fire company Worker’s Compensation Insurance.

The building Committee and Daryl Gipe continued to work on the building and equipment for the start up date January 1st, 1991.